Skip to content
One of the common laments of education reformers is that teachers put their own interests above the interests of their children. If only we would worry about children’s needs they cry we could make things better.


Teachers went from respected sometimes revered members of society to the public face of all of societies problems, often portrayed as lazy, selfish, barely educated and greedy and it doesn’t matter that none of it is true.


This year’s education report from the Organisation for Economic Co-operation and Development outlines the state of education in the world’s most developed countries. It finds that American elementary school teachers spend more hours actually teaching students than peers in any other surveyed country.

Or greedy because when compared to other professionals with similar education and responsibilities they make quite a bit less.

According to a recent study by the National Association of Colleges and Employers, the teaching profession has an average national starting salary of $30,377. Meanwhile, NACE finds that other college graduates who enter fields requiring similar training and responsibilities start at higher salaries:


This however hasn’t stopped them from spending billions of their personal money to outfit their classrooms, a fact which should destroy the selfish argument too.


A a 2010 survey by the National School Supply & Equipment Association found that 92 percent of teachers spend their own money on supplies and 85 percent buy instructional materials for the people they teach. Perhaps more surprising, the study concluded that, “Teachers’ personal money is the most common source of funding for classroom projects. On average, teachers spent a total of $398 on school supplies in 2009-2010 and an additional $538 on educational materials.” The total expended that year by the nation’s 3.7 million teachers? A whopping $3.5 billion.


Then their educations also far exceed the general public.

Only slightly over 30% of all Americans over the age of 25 have a four-year degree, where 100 percent of public school teachers have them. So in effect the education reformers who are so critical are saying that teachers are the worst of the best.

Then according to the national center for education statistics, 52% of teachers have advanced degrees where only 10% of the general public does and doesn’t that shoot a hole in the poorly educated teacher theory?

http://nces.ed.gov/fastfacts/display.asp?id=28
Every myth and distortion debunked.
So why the attacks on teachers? Well quite frankly one of the reasons is because teachers allowed them to happen. The reformers counted on teacher’s nurturing and sacrificing nature not to fight back. It is almost as if the entire profession suffered from battered spouse syndrome unable to defend themselves.
Well that time has passed. 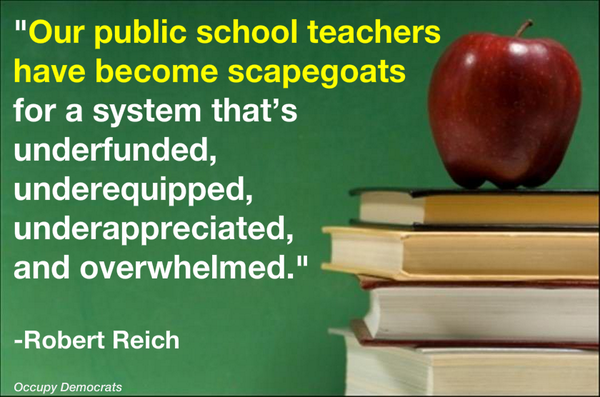 3 Replies to “America’s teachers some of the hardest working lowest paid in the world, check that, selfish, greediest and laziest around.”